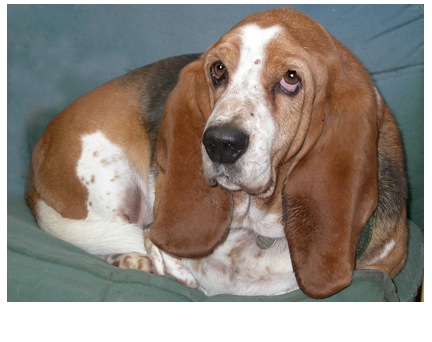 Bertie came into Welfare under the most tragic of circumstances.

His owners and their Bassets had been attending a function and were returning home on the motorway when the husband felt ill. His disabled wife was in the back of their modified car in a wheelchair. He pulled off the road and collapsed and died.

Their son went to collect the Bassets and his mother had the name of Welfare in her possession. He brought them into Welfare on his way home as it was unlikely that his mother would be able to stay in their flat on her own.

The hounds were kept together in a home environment in Welfare until the situation became clearer and while they were still under the shock of what had happened.

A new home was found for Bertie when we felt that he had recovered from his experience. After a period of settling in he has now become a much loved pet. Rosie who was much older and extremely traumatised passed on peacefully about a month later.