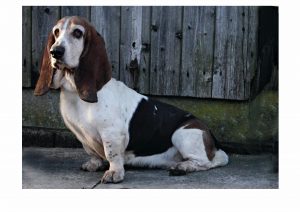 Daisy was eight years old when she came into Welfare. We have to admit to a fondness for the older hounds who have given so much but still find themselves homeless for various reasons. Despite this they nearly always maintain a quiet dignity about them.

Daisy’s owners had to move to a smaller home and decided to part with her. However the reality is that such hounds can be very difficult to re-home as many prospective owners will have recently lost an old hound and want to avoid going through the same trauma for as long as possible and some rescue charities refuse to take on older hounds. There is also the possibility of large vets’ bills with an elderly hound and Welfare has helped new owners taking on the older members of the breed in this respect.

It’s not all doom and gloom as there are a number of people who want a Basset, but with their own circumstances feel unable to cope with a younger one and the charity has moved older hounds considerable distances to find the right match which they deserve.

A good home was found for Daisy.