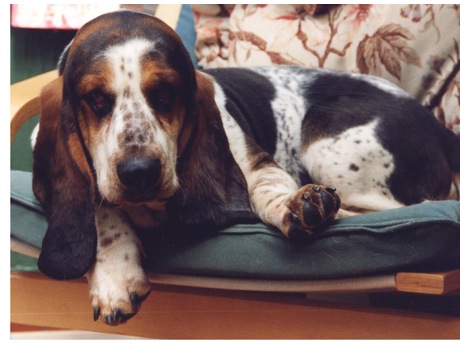 Freddie was one of some twenty dogs (ten of them Bassets) seized from a barn where they had been allegedly used for breeding. Although not in bad physical condition they were extremely frightened and very traumatised.

Working with the responsible organisation, Basset Hound Welfare undertook the gradual process of socialising the worst affected three Bassets which included Freddie. This involved gradually gaining their confidence, and slowly introducing them to the domestic habitat which most dogs take for granted.

There were some setbacks, such as the panic when they were rained on, as this may not have happened to them before.

Eventually after several weeks of care and patience, all three were found homes and Freddie became a loving and much loved pet with a softie Rottweiller and a hamster for company.