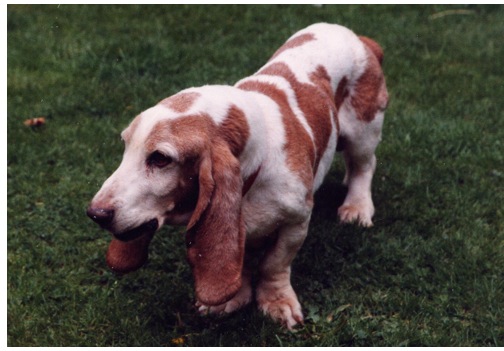 Not every story has a happy ending.

Old Fred was thirteen and looked all of it. He was lean, white, and had lumps and bumps all over him. His owner, who had had him since he was a puppy, had been out of work for some time and was going to try his luck in Ireland. He had found somewhere to live but Fred couldn’t go with him.

Fred asked for little and when walked would run happily in front and play with the younger Bassets. He was one of the happiest hounds anyone could meet and always seemed to have a smile on his face.

He was re-homed; it wasn’t ideal, and the family’s Jack Russell wouldn’t accept him and bullied him. It wasn’t in Fred’s nature to retaliate. He came back into the care of Welfare and had Basset companions in a home situation for the rest of his life. When one of his many lumps burst he was put to sleep as surgery wasn’t an option, but we did what we could for him.

His last days were happy and his smile will never be forgotten.