Is a Welfare Basset for me?

The Basset Hound is a unique breed and like anything unique, is not to everyone’s taste. We have often said that anyone who has owned a Basset either never wants another, or never wants any other breed. That’s the deal!

Read on to see if you are the sort of person or family which a Basset would deign to adopt. We shall refer to the hound as he or him, this is just a literary style, comments apply equally to dogs and bitches.

A Basset Hound is not a fashion accessory or style statement; he has been bred over centuries to be a hunting dog. He is a nose on legs and while very few Bassets are used for hunting today, this ancestry still has a profound effect on his character. 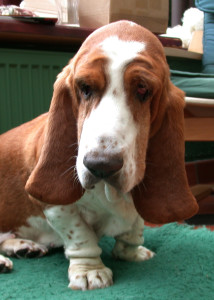 These are some of the essential characteristics of the Basset Hound which endear him to devotees but can drive others mad.

What about a Welfare Basset?  Am I taking on someone else’s insoluble problem?

Having now studied his make-up, and decided that your lifestyle (with or without adjustment) won’t conflict with this, with the help of Basset Hound Welfare and the right approach, you should have a wonderful addition to the family.

Hounds come into Welfare for a number of reasons and most revolve around the characteristics which we have considered, but the previous owner has learned the hard way.

By far the most common reason is that, due to work or other commitments, he is being left on his own for ever longer periods and has become noisy (crying, barking or howling). This causes friction with neighbours, and in extreme cases Environmental Health Officers. The howling of a hound is music to the enthusiast – so is the sound of bagpipes! Other ways in which the hound reacts to this alien situation are soiling and destructiveness. Take away the isolation (separation from the pack equals rejection to a pack animal), and the problems usually disappear. 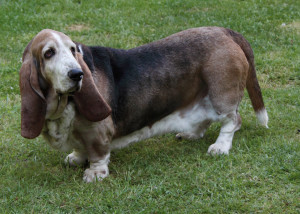 The arrival of a new “pack member”, new baby, pet, partner etc. can produce similar reactions when the hound’s position in the hierarchy of the pack is suddenly threatened or he is forcibly demoted. As well as the above symptoms, aggression is sometime cited, and the perceived danger to eg: a new baby, is sufficient to accelerate the Basset’s departure. The recognition of the hound’s pack instincts and a settled “pecking order” should produce a ” happy again” hound.

Relationship breakups often give rise to the hound’s isolation as above. They can also give rise to situations in which people have to move into rented accommodation where they cannot keep animals. The Basset Hound is, surprisingly, an extremely sensitive creature and senses discord in the pack, re-acting unfavourably to it. Again, a stable environment provides the cure he seeks.

There are other reasons for hounds coming into Welfare, including:

The Basset Hound is an adaptable creature when he knows the score,  friendly towards other members of the “pack” (children, cats etc.), and towards known visitors to the house and other dogs he meets outside.

Given the appropriate environment a Welfare Basset will usually reward the faith you have shown in giving him another chance and will show a personality all his own and a depth of character unique to the breed. Talk it over with your nearest BHW representative or contact.

Basset Hound Welfare does not deal with puppies and only very occasionally takes in hounds less than six months old.

If you or someone you know is interested in buying a puppy, please be very careful. Be certain that your lifestyle will support another family member. Before deciding on a Basset, try to meet or talk to someone who has or has owned one as a pet. Your local BHW representative or contact, or the breed clubs, may help you in this. Please be patient and try not to buy on impulse (which can be easier said than done). Remember the old Dogs Trust slogan – “A dog is for life”. It doesn’t only apply at Christmas.

One final “health warning” – Basset Hounds can be addictive !!

Whether you are the owner of a problem Basset Hound or interested in providing a loving home for an unfortunate member of the breed, the next step is to speak to your local representative or contact.

To give an idea of what you may expect, the following tells you how we operate:

Whether you are seeking advice about your present hound, or offering an alternative home for a Basset who has to be re-located, a frank assessment of your lifestyle with the sympathetic ear of the local representative is absolutely necessary. This initial stage is vital to a successful outcome. Basset Hounds, while all being similar, have differences which cause them to prosper in some environments and react badly to others. The information, which can only be provided by you, is vital to determine if the hound can be sustained in his present location, what adjustments may be tried, or if re-homing is the only solution.

Information given by those seeking to offer an alternative home to a “refugee hound” will assist our representative in ensuring that the circumstances causing his present predicament are not repeated. The importance of this crucial information, whose collection may be by the filling in of forms, or in conversation cannot be over-stressed.

We usually undertake home visits in order to establish a vision of you and the lifestyle into which a hound will enter. This again is a critical part of the matching process of hounds to homes. It is informal and not an inspection.

If we consider that the match of hound and new home is acceptable we will enter an agreement and suggest a donation to the Charity. This is to cover vet’s fees, kennelling costs, logistics etc., not just for your new hound but also for the less fortunate members of the breed. It is a donation and not related to the costs incurred by the individual hound.

Basset Hound Welfare recognises its obligations as an animal welfare charity and undertakes that all dogs re-homed will be castrated and all bitches will be spayed. If circumstances dictate that the time is not appropriate for this to be done, an agreement will be drawn up for the procedure to be undertaken at the appropriate time and substantiation in the form of a vets’ receipt submitted to the Charity.

If for any reason the re-homing does not prove successful, or the new owners’ circumstances change, making the continued ownership of the Basset untenable the hound must be returned to the Charity and not passed on.

If Basset Hound Welfare is not satisfied with the conditions in which a re-homed Hound is kept it may repossess it.